A journey through the Amazon forest as seen through the eyes of little monkey Kong, the sole survivor of a plane crash. Beside him, the film unveils the mysteries of the fauna and flora of the world’s largest tropical forest in all its complexity. Shot entirely in 3D technology, this is the biggest film ever to be shot in the Amazon. From the director of The White Planet, is was the closing film at the Venice Film Festival 2013. 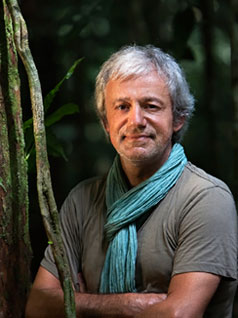 Born in Paris, he has worked for 10 years as an editor and director of Jacques Cousteau’s TV series À la découverte du monde. He has directed several award-winning documentaries, such as Alexandrie la magnifique (1997), L'énigme des Nazcas (1999) and À la recherche de Saint-Exupéry (2000). His most famous work is The White Planet (2006), a documentary co-directed by Thierry Piantanida about life in the Arctic region.