​Carlão is a bigoted man who works in a car dealership with Cadinho, Zeca and Antunes. While talking among them, Carlão always boasts of knowing everything about soccer and car mechanics, unleashing a volley of chauvinistic and homophobic jokes. When Evaristo is the target of such verbal aggressions, he locks Carlao inside a magic locker. From there comes out Carlinhos, a homosexual alter ego that takes over Carlão's body when night falls.​ 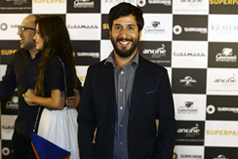 ​Born in 1997 in Brasilia, he graduated in Film at the NY University. He has worked on commercials and several short films, such as Domingo de Páscoa (2008), as well as the Quase Anônimos (2009) Multishow TV series. His first feature film, Mato sem Cachorro (2013), was screened at the Rio Festival. Previously, he worked as an editor in other films, including's Olga (2004), directed by Jayme Monjardim.​