Pablo, a retired 70 year old teacher, seldom leaves his house. His world ended 20 years ago, when he lost his wife in a bombing in Bogota. His son, Felipe, is 35 and has become himself a parent for the first time. Dedicated, he can take care of nearly everything, except his relationship with wife Claudia. In the midst of rumors regarding the end of the world in December 2012, the film examines the end of the world as being the meeting of ordinary people and their greatest fears. While awaiting for the prophecy to come true, Pablo decides to phone everyone he has crossed paths with.

Born in 1970, in Colombia. He studied history, law and drama. He graduated in film and television directing at the Universidad Nacional de Colombia, 2000. He is a screenwriter, documentary filmmaker and teacher. Cronichles of the End of the World is his feature-length directorial debut. 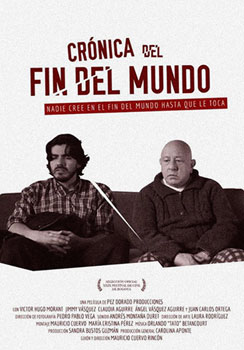