From Tuesday to Tuesday De Martes a Martes

At 35, Juan’s major hobby is weightlifting. He trains in the morning and works the rest of the day. In spite of his bulky build, he is kind and docile, which results in his being constantly oppressed by colleagues and the boss at the factory he works in. His greatest dream is to change his life and open up his own gym, but he hasn’t the money for it. One night, Juan witnesses a rape. Investigating on his own, he finds out that the rapist is a rich entrepreneur. Juan must now decide whether to report the assailant or milk him for the amount of money necessary to make his dream come true.

Born in 1972, in Buenos Aires, Argentina. He graduated at the Centro de Investigación y Experimentación en Cine y Video. Has worked as a director of photography in over 70 films in the last 18 years. From Tuesday to Tuesday is his feature-length directorial debut. 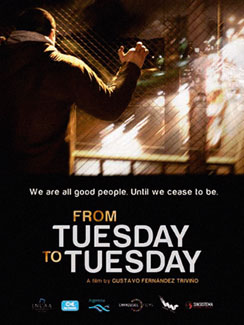