A behind-the-scenes look at current French president's François Hollande's first year in office. A never-before-seen portrait that sticks closely to his daily life, his meetings with counselors, his preparation for international events and discussions with his most important ministers. Director Patrick Rotman, who made several documentaries on major French political figures and historical events, once again frames a decisive moment in the country’s history. 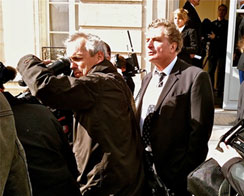