​The young couple Miguel and Johnny spend their days skateboarding around chaotic parts of Mexico City. They enjoy their simple sexuality and donate blood to the black market. An easy way to make money appears when an acquaintance recommends them to dealers who need blood, but can’t go to the hospital. The plan soon goes wrong and the couple notice too late the environment around them, a secret network of clinics at the service of the wounded in the war against drugs. Shown at the Locarno Film Festival and Toronto Film Festival 2015.​ 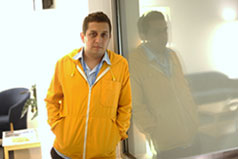 ​He was born in North Carolina, USA, but grew up in Mexico, Guatemala and Costa Rica, where he studied cinema. His directing debut, Gasoline, came out in 2008, and won awards at the San Sebastian Festival and BAFICI. Then he made Marimbas from Hell (2010), shown in Toronto and San Sebastián, and Polvo (2012), which took part in the competition at the Locarno Film Festival and was shown at the Toronto Film Festival.​