While Louise gets ready to become a mother, her bother Ludovic lives out the last moments of his life on a hospital bed, under his sister’s tender gaze. Waiting for both a birth and a death, Louise shares her expectations regarding the new world that awaits her and her beloved Nathan, while she sees the sale of her father’s castle through along with the rest of the family. Actress-turned-director Valeria Bruni Tedeschi’s new autobiographical comedy references Tchekov’s The Cherry Orchard. A movie on grounds, gardens, memories and the end of an era. Official Competition, Cannes, 2013.

Born in Italy, in 1964. As an actress, she has been honored at festivals such as Venice and Locarno and has worked with important directors like Steven Spielberg, François Ozon, Ken Loach, Claude Chabrol and Claire Denis. Her directorial debut was It’s Easier for a Camel (2003), shown at Tribeca and Vienna. Her second film, Actrices (2007), was awarded a special jury prize at the Un Certain Regard section of the Cannes Film Festival. 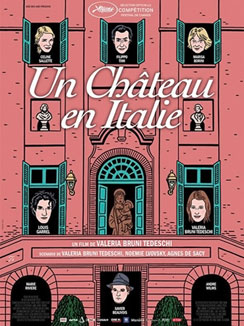