The last days of Dylan Thomas 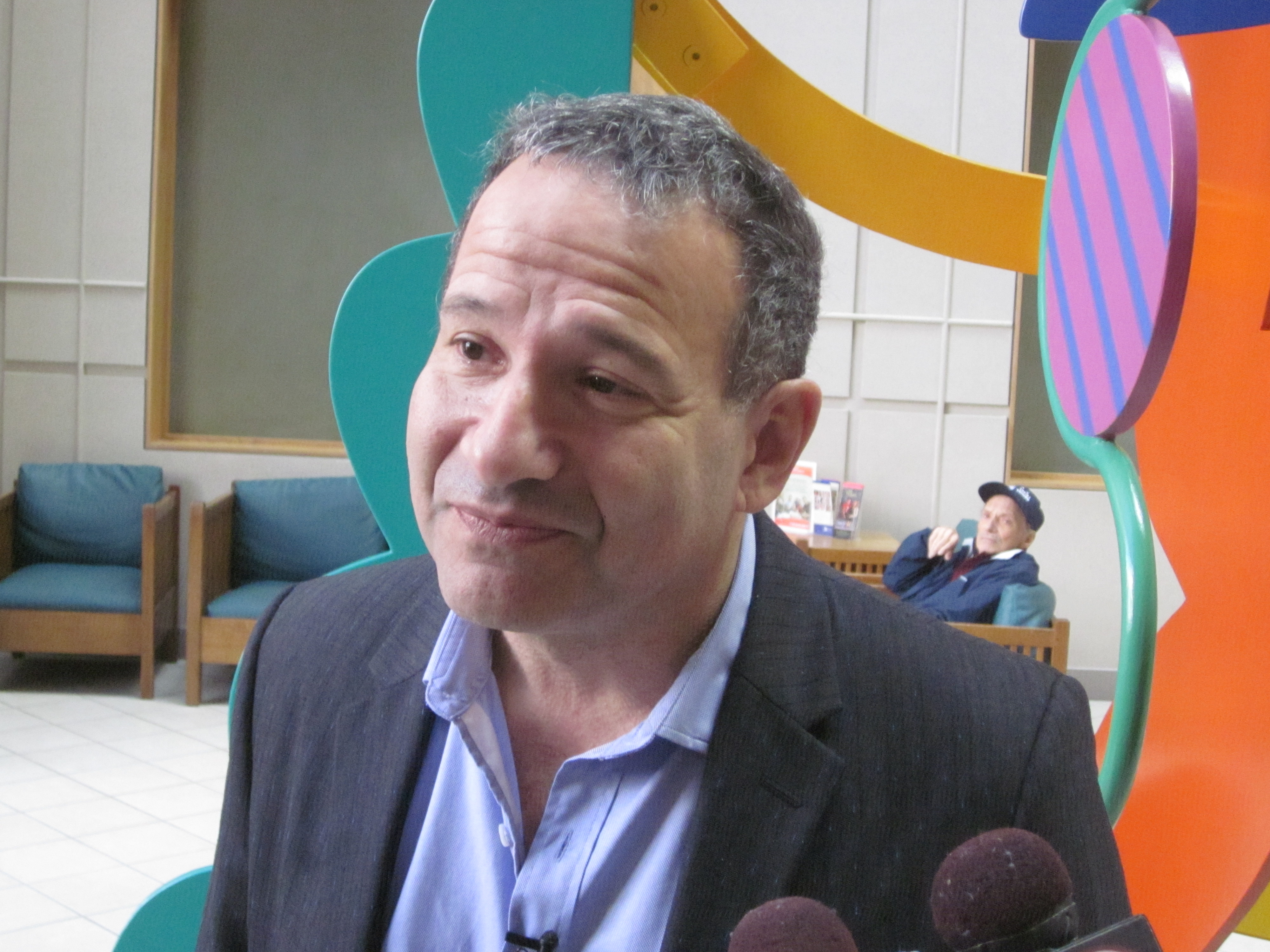 The last days of the Welsh poet Dylan Thomas were  legendary. And full of mystery. But the American writer and director Steven Bernstein is not interested in solving the mystery. His movie Dominion tells the story of the death of Thomas, in New York after drinking 18 double shots of whiskey in the famous White Horse Tavern. Those moments are mixed with the delirium tremens of a mind full of alcohol and his intoxicating poetry.

The result is a movie that fascinates the audience with the high voltage and tonal quality of great performances like the one of Rhys Ifans, a very well known interpreter of Dylan Thomas' poetry and radio plays in theatres in Britain. Rhys recently played "Captain Cat" in Under Milk Wood (one of Dylan Thomas's most famous radio plays), directed by Kevin Allen. Besides Rhys, the cast of Dominion has John Malkovich, Rodrigo Santoro, Tony Hale, Romola Garai and  Zosia Mamet.

Steven Bernstein made his directing feature film debut in 2014 with Decoding Annie Parker (Helen Hunt, Samantha Morton, Aaron Paul) after a long career as cinematographer, on movies such as Monster (2003) and Like Water for Chocolate (1992). His new movie, Dominion, will be shown at Festival do Rio on October 7th, at Cine Odeon. Here are Steven Bernstein’s comments about his movie

FESTIVAL DO RIO: Your movie gives us a wonderful opportunity to talk about one of the greatest modern British poets. Dylan Thomas was always a controversial figure. His death in New York was surrounded by mystery. Thomas was a hard-drinking writer. He died very young, 39 years old, after multiple visits to the White Horse Tavern in New York, and in the middle of a tour for public performances and poetry readings of Under Milk Wood. You also wrote the script of the movie. Was the script based on a biography of Dylan Thomas, like Paul Ferris' or Andrew Lycett's books?

STEVEN BERNSTEIN: Dominion would seem to be a bio piece but it's not. At least not in the traditional sense. I had no particular interest in telling or retelling his story.  I was more interested in his particular sensibility and how that provided both the genesis of his genius and the seeds of his self destruction.

We tend to see history as a series of events that occur in a particular order. But I would suggest that we mediate the world though a fluid template of memory, experience and fantasy. For the artist obsessed with understanding the world who is also self anesthetized with alcohol, how is the world then experienced?

FESTIVAL DO RIO: How did you research the circumstances of Dylan Thomas's death?

STEVEN BERNSTEIN: Dylan Thomas had 18 double scotches in the White Horse Tavern in one day. In my story he names each drink after an experience in his life or an idea that is important to him. As the drink begins to affect him his reality, his dreams and his memories blend on an interior journey that becomes our own experience as we watch the film.

So no, not based on any biography, just my understanding of his poetry.

FESTIVAL DO RIO: Were you inspired by Rhys Ifans’ performance of Under Milk Wood, in the movie directed by Kevin Allen?

STEVEN BERNSTEIN: Rhys Ifans plays "Captain Cat" in Under Milk Wood which was written by Dylan Thomas and was shot after Dominion. I haven't had a chance to see it, though I suspect it's great.

FESTIVAL DO RIO: How was your dynamic with Rhys Ifans, who is a well known interpreter of Dylan Thomas' poetry and radio plays? Do you think Ifans' performance in your movie is different from the ones he did in theatre?

STEVEN BERNSTEIN: As for the dynamic with Rhys, this was a remarkable experience. We spent a few weeks together discussing the character and evolved a particular methodology on set that allowed Rhys to completely inhabit the part. There was some improv, to give him a sense of freedom, though 99 percent of what ended up on screen was from the script I wrote. Still, I made it clear that if he missed a line or a word, it didn't matter, to plow on, to be Dylan.  Often we would have the background actors speaking at full volume on the first takes, which made the takes unusable, but allowed Rhys to find the right volume and tonal quality and to feel "present" and like he wasn't acting. He would literally have to speak OVER people. And I encouraged people to interrupt him, to step in front of him, to reach over him. It changed the performance.

FESTIVAL DO RIO: How was the crew in Montreal?

STEVEN BERNSTEIN: The crew in Montreal was brilliant. Between takes no one spoke except in whispers and then each take would follow the other with barely a pause. A device I learned when shooting the movie Monster, as a cinematographer. Charlize Theron and Christina Ricci's farewell was shot in complete silence. Not only during shooting, but between takes, which required huge cooperation from the crew. Both then and on my film, the crew understood and facilitated the actors.

FESTIVAL DO RIO: And how was it to work with a script full of poetry and actors who like to improvise?

STEVEN BERNSTEIN: As for our film, few scripts have had more words, I think John Malkovich told me that and I think it was later suggested NO script has more words. Maybe some Tom Stoppard piece. I don't know, but for Rhys the intensity of feeling, the intellectual rigor that was required with all those words and the vast range of feelings and the complete focus he needed, produced something the likes of which, I at least, have never seen.  It's more than a performance. By the end he was so physically spent, so emotionally ragged I thought he wouldn't finish. But everyday he showed up and did it again. And I think he went on to another film the next week. Remarkable. But it wasn't just him. Tony Hale is known as a comedian, but is brilliant as the American poet and literary critic Malcolm Brinnin. Zosia Mamet (the daughter of David Mamet, the playwright and film director) is touching and tragic. Malkovich was my special collaborator on this film (he is one of our producers) he understood from the outset what I was trying to achieve and he brought to his role his unique time, his brilliant ability and his sense of irony.

FESTIVAL DO RIO: Did you recreated the ambiance of The White Horse Tavern for the movie? How is Rodrigo Santoro's part? Was his character a real person or a imagined one?

STEVEN BERNSTEIN: I had not worked with Rodrigo before. It was a special collaboration and we have become great friends. Rodrigo is an actor's actor and for him so much is about the preparation. We talked at great length about "back story" and I think in the end his characters back story ran to over 60 pages. He also had to learn to Tango, which he does beautifully, but most of all he had to keep hidden from Dylan and the audience his true identity until the film's climax. The transition is magical and the confrontation that follows is to me one of the key moments in the film. Rodrigo's character is not based on a real person.

FESTIVAL DO RIO: Is it true that the doctor gave him "injections" in order to help him complete public performances?

STEVEN BERNSTEIN: As for the doctor, I think one of the things the film looks at is how celebrity, and Dylan was one of the first "celebrities" (in the modern understanding), becomes an attraction for others looking for an easy conduit for their own success. It could be argued that everyone in the film is using someone else; that don't see others as people but rather as mechanisms. This is perhaps Dylan's greatest fears. That those that love him, don't know him, and those that know him don't love him, and those who celebrate him don't understand his work and those who understand his work don't celebrate him. It is all a great seduction, he might have said. And seduction isn't about love.