Alejandro, a 55 years old lonely man, carries the burden and the guilt of a dark past. Aging, he seeks a new identity, but cannot rid himself of his ghost and manias, eschewing an objective look at reality. Little by little we find out why his past is such a burden to him. Alejandro is a former henchman who committed atrocious acts during Pinochet’s dictatorship. Decades later, he seeks redemption and tries to give new meaning to his own life. New Directors Competition at the San Sebastián Festival. 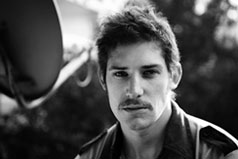 Born in Santiago, Chile, in 1983. He has worked as a screenwriter and director both in television and advertising. He teaches at cinema and theater schools. In 2008, his documentary La Colorina competed at the Montreal Film Festival. Dog Flesh is his feature-length fictional debut. He is currently working on his second film, No One’s Boy.