​Master storyteller with an unmistakable voice, Hugo Carvana (1937-2014) recounts the trajectory of his
60-year-long career through interviews from the 70's onward. Among his stories and old movie scenes, the screen is filled with images from his days as a theatrestudent and extra in chanchadas, of his remarkable presence as an actor in Cinema Novo, of comedies and of his political activism throughout the history of the country.​ 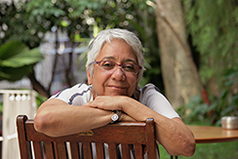 ​Director of the short film Como Se Morre no Cinema (2002), Sol de Oro at the Biarritz Festival, and A cidade e o Poeta (2007), winner of the Brazilian Cinema Grand Prix. Carvana is her first feature.​