​Documentary on the life and career of Charlie Brown Jr.’s frontman Chorão. Using testimonials about his private and professional life, and images from personal and media records, the film traces the history of one of the most important Brazilian rockstars. Since the 1990s, when his band released their first album and hit the air waves, Chorão has experienced intense decades of national and international success, full of controversy, until his early death by overdose in 2013. The film explores his many sides and aims to answer what is the price of success. 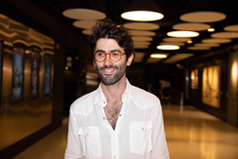 ​Graduated in Journalism from Casper Líbero College, in São Paulo, specialized in Audiovisual Production at New York Film Academy and postgraduate in Documentary Cinema at FGV-Rio. Over the last years, he has helped to develop projects for broadcasters and producers, such as TV shows, music videos, documentaries, short films and advertising campaigns.​