Home from Home - Chronicle of a Vision Die Andere Heimat

The first Heimat installment planned for theater. The series spans a whole century of events. Here, the director continues to chronicle the fictitious village of Schabbach. In the mid-1800s, life is difficult there; little food and work; many are wondering about leaving their native land. Among the worried ones, there is young peasant Jakob, who reads every book that falls into his hands. He proceeds to study the language of primitive indigenous peoples and dreaming of how life would be in the jungles of Brazil. Werner Herzog plays a part in this film. Venice and Toronto 2013. 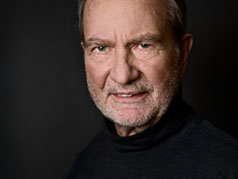 Born in 1932. In the 1960s, he was part of the Oberhausen group, which defined author’s films in Germany. Amid his vast filmography, his greatest work is the Heimat trilogy, shot for TV and spanning a whole century’s worth of events, clocking in at over 54 hours: Heimat: A Chronicle of Germany (1984), Heimat II: A Chronicle of a Generation (1993) and Heimat III: A Chronicle of Endings and Beginnings (2004).